As “double weekends” become more and more popular in the running community, there is often one race that gets more of the attention than the other. These weekends are planned to maximize travel time, and reach goals such as 50 states. The weekend of my Ohio double of Capital City in Columbus and Flying Pig in Cincinnati, I had more of a focus on Flying Pig. However, as often happens, it is the one with less anticipation that ends up being the favorite.

Coming into Cincinnati, I had already been to the Flying Pig expo. I checked into my room at the Renaissance Hotel before heading to my second expo of the day. When I arrived in the room to put my things away I discovered there was only a walk in shower. My epsom salt baths are a crucial part of my recovery routine, luckily, the staff at the hotel graciously moved me to another lovely room with a tub… this will now go on my “preferences” list for all future reservations!

I made my way to the expo, just a few blocks down the street. It was small, but easy to get around, a welcome break after the chaos of the flying pig set-up. I was pleasantly surprised by the under armor race shirts. A great design, material, and quality. The picture below is of the two shirts for my weekend side-by-side… this one was actually my favorite! 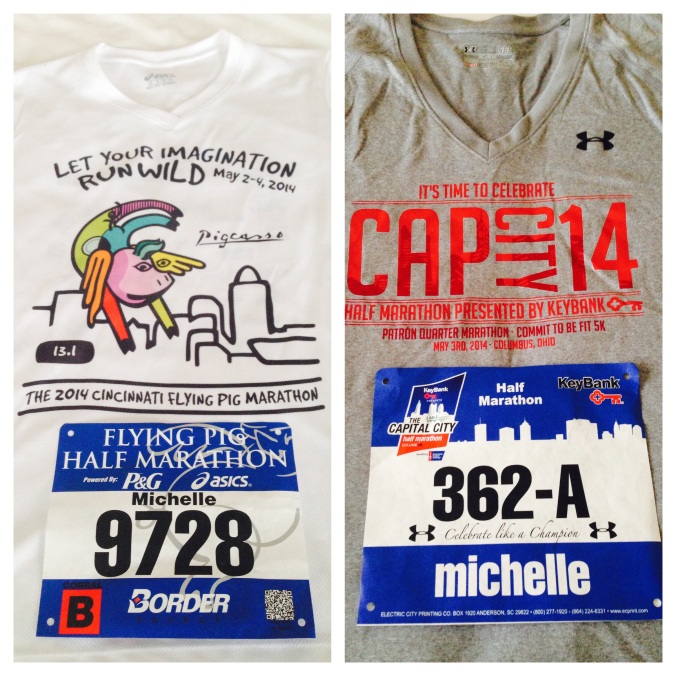 On the recommendation of the Hotel Staff I ate dinner at Due Amici and was not disappointed! The service and ambiance were great – and the pasta was perfectly cooked.

house bread at Due Amici

Race morning came and the weather was perfect. An easy walk to the start line and the energy in the air was magnetic. Crowds were gathered to watch the 11th annual race take off… Craig Leon, Ohio Native and Elite Runner, was there to encourage runners at the start line. He referred to the chilly air as the “weather of champions” – 1:09:55 later Leon would win the half marathon. The crowd was pumped up with an OHIO chant from special guests SWAGG and FBA

Leon encourages the crowd before the race 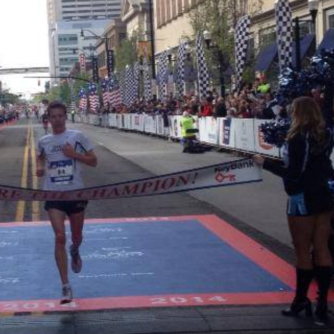 Craig Leon as he wins the half marathon

The race ran through the streets of Columbus and around the Ohio State Campus. Great crowd support and organized entertainment made the miles pass quickly.  One of my favorite highlights of the course however was the time in the Historic German Village, an area settled by immigrants in the early 1800’s and is now recognized as a model of urban neighborhood preservation. I love races that make me want to learn more about one city I spent time in – this was one of those times. The finishers medal was simple, classic, and high quality. Of the 93 half-marathons I have run, it stands out as one of my favorites. The finish line festival was great – with live performances by SWAGG kept the energy alive even as the last runners came in. I would recommend this race to anyone looking for a companion for Flying Pig in 2015 – or all on its own!

It was to be a quick stop. Attending the expo on Friday, even though I had a race in Columbus on Saturday was a logistical decision, and turned out to be a wise one. Arriving shortly after opening, the lines were already long, and did not get shorter during my stay.

The packet pickup for the Flying Pig Marathon weekend was divided into two stops – race numbers at the Millennium hotel (the host hotel for the weekend) – swag and expo across the street at the convention center. Bib numbers had to be collected first, as the shirt, poster, and premium bag could only be collected after.

The Flying Pig Marathon offers several different race options including a kids marathon (where the 26  miles are run in increments with the final mile on race weekend), a flying fur run (a two-mile run with dogs on saturday afternoon), a 5 and 10k on Saturday morning, and a half and full marathon on Sunday. In addition runners can compete in a Pump n Run event which combines running and weight lifting.

I named this photo “daybreak over port-a-potties”

The race start turned out to be about a 3/4 mile walk from the host hotel. Starting just outside of Paul Brown stadium, home of the Cincinnati Bengals. Runners taking in the skyline hurried into corrals ready to for the 6:30 AM start. The course was beautiful and crowd support was heavy. Shortly after the start the race went past the Cincinnati Reds Ballpark. Winding along the river the turns and hills quickly led runners to the Bridge where we passed into Kentucky for the next leg of the race.

While most of the race is hilly, the flying pig is known for “the hill”… a nearly two-mile climb that takes you to the top of the city. The climb is big – but the payoff in the view from the top is bigger. There is a sense of camaraderie along this stretch of road, and throughout the challenge runners pushed forward with smiles on their faces.

Once the hill is completed, most of the remaining miles are downhill – this course is anything but flat and fast – however those who dare to pick up speed on the down hills can make up some of the time from their climb. This part of the race was also marked by sweet treats – with the crowds handing out licorice, jolly ranchers, and swedish fish. None of this however could compete with the beer – nicely placed at the 12.5 mile mark – just before the “finish swine”.

The medal for this race is two-sided. The half medal is smaller than the full – which also has a colorful ribbon. There was some complaint about the ribbon for the half, I however did not mind. Runners expect a significant upgrade in the medal for the full – and it seems to me that upgrading the ribbon is a great way to add perceived value without and excessive cost for the race directors. Besides, it gives me something to come back and work for next year! If I was to do anything differently, it would be to book a hotel closer to the finish line at the Red’s Stadium. The host hotel, while very convenient for the expo, was a mile away from the finish – and almost completely uphill! Despite this, it was a great weekend running – an event I would highly recommend to all in the running community.