Yesterday I received a discount code for the 2nd annual “Splash and dash fun run” at Lake Baldwin Park in Orlando. While I will not be going this year, several people have asked about this race, so I found my review and decided to repost it… the following are my reflections from a year ago:

This past weekend I participated in the Orlando Sport and Social Clubs first Splash N’ Dash event at Lake Baldwin. As I continue my review and reflection on the event, it is important to note that they are not race organizers, but social directors. Looking at their website, you will find the opportunity for several sports leagues, from football to kickball, as well as social events such as Bar Crawls and happy hours. The first thing I will say is, never have I seen so much food BEFORE a race, Lime Fresh was making Nachos and Tacos, Dunkin Donuts with coffee and donut holes, and Mini Subs from Jersey Mikes.  There were runners and their families milling about eating, and I indulged in a little pineapple salsa from Lime Fresh since it is one of my very favorite things, and I imagined it would be done by the time we finished running.
I peered into my bag and saw the t-shirt (not technical) and some coupons, but no race bib. I looked around and noticed, no one has a race bib, this is obviously not timed… but how do they know who is supposed to be here?  It was hard to tell even by the way people were dressed, kids inflatable toys on their heads, a guy in a speedo, lots of costumes… this was indeed a “fun run”.
The race begins and we start running around Lake Baldwin.  I know it ends at the slip n slide, and I know it is 2.5 miles around the lake, so I already know this is not actually a 5K. It is hot and muggy, and I am actually looking forward to having some squirt guns pointed at me… then my mind begins to wander. There is no way of knowing who actually paid to be here, no identification for who belongs. Runners did bring filled water balloons for the fight which would ensue after the race… and by the piles of them, most of these people must have brought plenty.

What the Orlando Sport and Social Club had created here, and what they work to create in all of their events, is community. Did it matter who belongs here? We all belong here.  On this hot and muggy Saturday morning hundreds and hundreds of strangers had come together for one cause: to have fun.  Fun is something we often forget to have in our adulthood.  When it is there, it is often calculated and organized… and lacks the spontaneity and exuberance of youth. The rest of the run I focused on one thing… the smiles on the faces of all of the people around me… all races and ages standing together letting their morning drift into enjoyment and laughter. 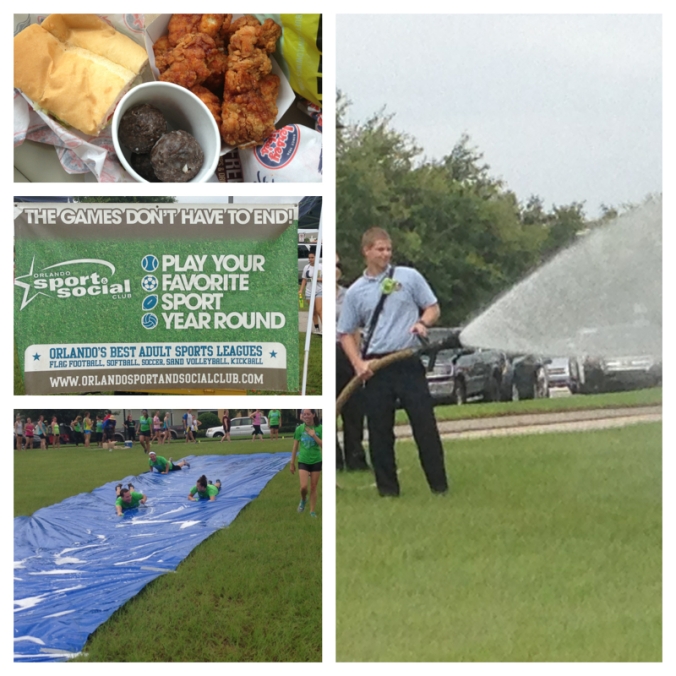 Food, Fun, and Firemen at the Splash and Dash Fun Run 2013

The end of the race came with a fire truck and a “real” fireman spraying us with the firehose (gently), which people seemed to love. The food venues were not out of food, in fact, a large van from buffalo wild wings had joined them with a BUFFET of hot wing selections.  People were laughing and dancing and eating and playing, getting ready for the water balloon fight.
There are some things that could be done to make this race better next year… however this event reminded me of how the weekend is supposed to be, but often isn’t. I want to thank the Orlando Sport and Social Club for making me remember that sometimes, I take life a little to seriously.

Things are starting to heat up in Orlando and the best way to cool down is the 2014 Splash ‘n Dash on 7/26! Participants will experience SPLASH zones & DASH zones and a 75 ft slip n slide! Don’t forget to stick around for the HUGE post race water balloon fight, so prepare to Get Wet This Summer!