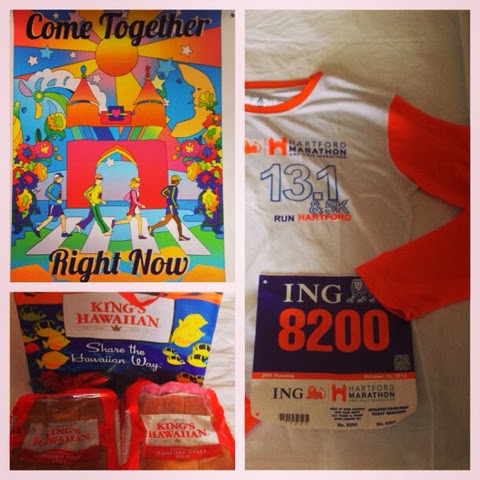 This was one of the races which kept popping up, in Runners World articles, at Expos, in Conversations… but it never fit into my schedule.  Finally, in this season of 52 races, I decided to pair it with a weekend in New York, so my journey begins.
I had never been to Hartford before, but I knew that this was a race with a lot of history. Celebrating their 20th anniversary, the ING Hartford Marathon was sure to be a big event… and it did not disappoint.
The expo itself was small, but the bright “Come Together” signs lit up the hallway leading to a few dozen vendors. The tech-tee was long sleeved and unique to the half marathon, those running the full marathon received a solid “heathered” orange colored shirt. I was handed a Kings Hawaiian bag with two dozen rolls in it – one of the most unusual pieces of swag ever received at a race. Tired from my early flight, I was off to find my hotel to check in and rest for the night. 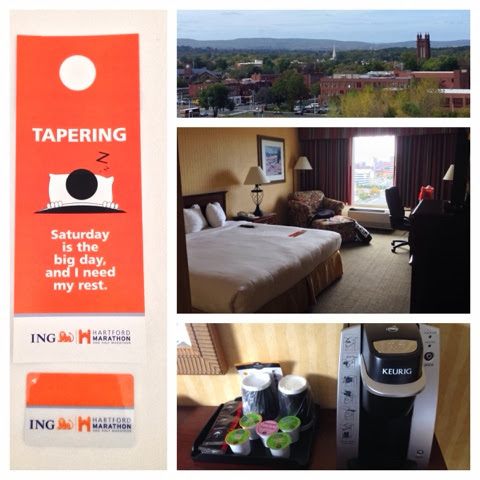 Taking a leap of faith, I had booked a room knowing only the general location, price, and rating on Hotwire. After my booking was complete I discovered I would be staying at the Ramada Plaza Hartford Hotel. It turned out that this hotel could not have been more convenient  It was a half mile from the Expo, a mile from the race start, and literally steps from where I would catch the bus to NYC the following day.
Not directly associated with the race – I didn’t expect them to have any special amenities for us. Walking in the small lobby I saw signage and the front desk clerks were wearing ING Hartford Marathon shirts. After checking in I received the branded key and special TAPERING – DO NOT DISTURB sign (pictured above). The room was comfortable and equipped with a Keurig! I was sold – if coming back to Hartford for any reason I would book directly with this hotel!
I shared the room with another Half Fanatic whom I had met on the Facebook Page. That evening we went and checked out the start line  and noticed that the finish line festival area being set up was HUGE. The Ramada had a special menu for racers so we ate in the hotel. The food was wonderful and reasonably priced.
We set out bright and yearly in our Half Fanatics shirt – and gathered to meet several other Fanatics for a group picture.
Security was tight, images of tragedy at the Boston Marathon earlier in the year flashed through my mind as I watched police checking backpacks. The start was at the Capital Building, and armed guards were perched at several points watching the crowd. No one there minded their presence, in fact – there was a buzz of gratitude and a sense of community that filled the air.
After a lot of Pomp and Circumstance, and what may have been the longest pre-race prayer I have ever witnessed, we were off. The course was pretty, the weather was cool, the support was plenty, and I felt wonderful. 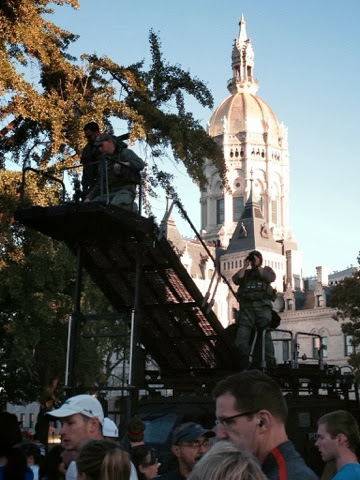 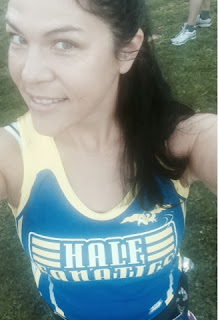 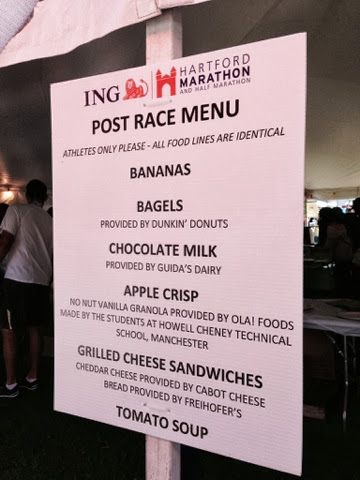 At the finish festival – runners were treated to complementary massages, (there was a long line but it moved very fast and was worth the wait) LARGE bottles of Chocolate milk and a fantastic and free post race lunch, the menu is pictured above. 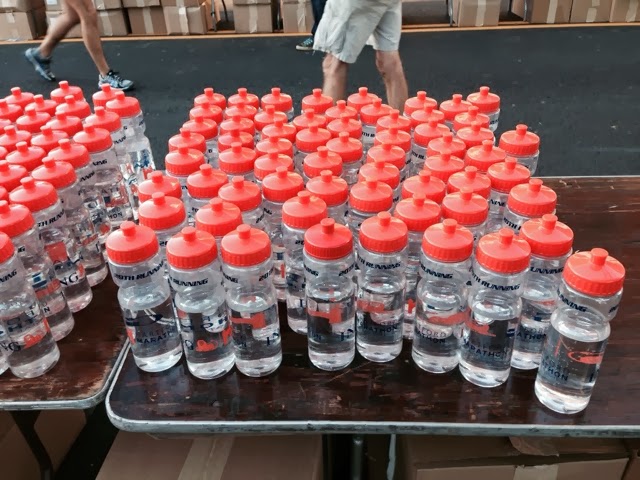 Stretched out and feeling replenished from the grilled cheese and tomato soup, I walked back to my room looking at the water bottle we had been handed at the finish line. There were a lot of little details at this race that made it very unique and special. The fact that this was this seasons PR for me did not hurt either.

The race medal, which pictured the archway runners ran through just before the finish line was stunning, and attached to a satin ribbon with the year imprinted on it. It was a beautiful event and one I would be excited to run again.

Now however I was off to catch my ride to New York City. I had secured a one-way ticket for $3.50 on Megabus. Stretching at the bus stop with my fellow runners, most of whom were heading home to NY after the race – I knew I was in good company for this next leg of the trip! 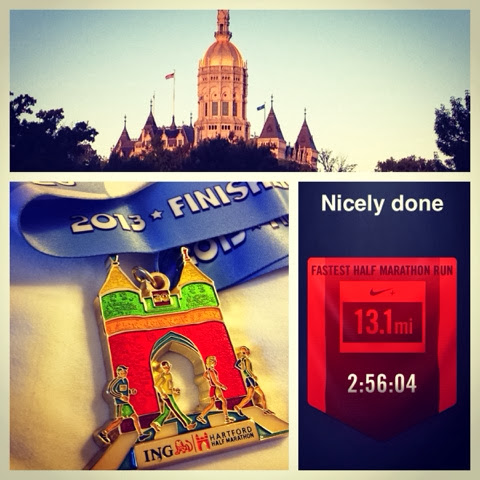