I was admittedly skeptical. I mean, I really do enjoy Jimmy Buffets music…. it’s fun, breezy, freeing…. but a musical? Would there be any substance or story? How much of this would be the music we know and love and how much would be original? 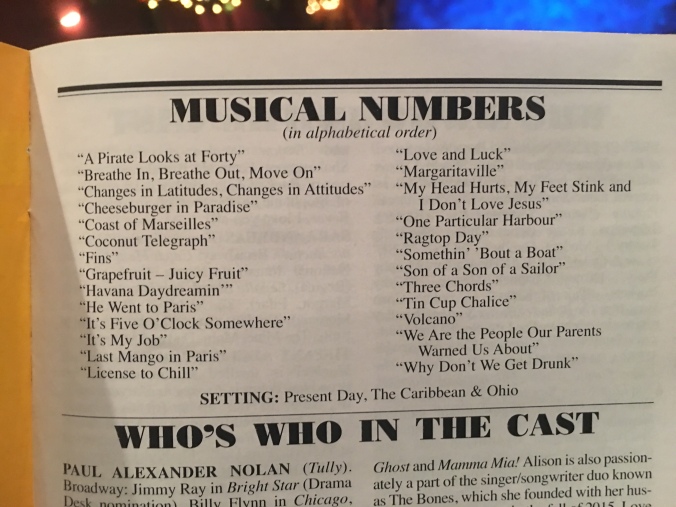 I got my answer quickly looking at the list of musical numbers… but I noted that these were in alphabetical order… it was not the set list… so as I sat imagining the story…. all I knew was that it was set on an island… and in Ohio.

The atmosphere was set for this island adventure from the moment you entered the Marriott lobby where the entrance to the Marquise Theater is.

Attendants at the concession stands offered numerous themed drinks – and the feeling in the air was light… and warm; a stark contrast to the news of the day and the actual temperature outside.

So I settled in to this imaginary island and as the story unfolded…. a wedding, a girl, a volcano island and shaker of salt that just kept getting lost… cheeseburgers and carrot juice…. trips to Paris and memories of love and loss; I realized what a truly brilliant songwriter Jimmy Buffet is. I had missed some of the depth in his his music… but I had always felt the warmth of the words.

The audience responded willingly to the less than subtle request to fill in certain words and sing along on cue.

The book was written brilliantly with humor and a well woven plot to string a story pulled from Buffets lyrics.

At the end – hundreds of beach balls fell from the rafters and bounced around the audience. A standing ovation was given before the lead characters took their bow.

As I left this island and ventured out into the cold night air I smiled as I listened to young girls singing about cheeseburgers in paradise – beach balls in hand.

I know the show has received some negative reviews – however when reading them, it seems they are negative for exactly what the show intends to be… a few hours of fun and loosing yourself in fantasy… I, for one, would see this show again…