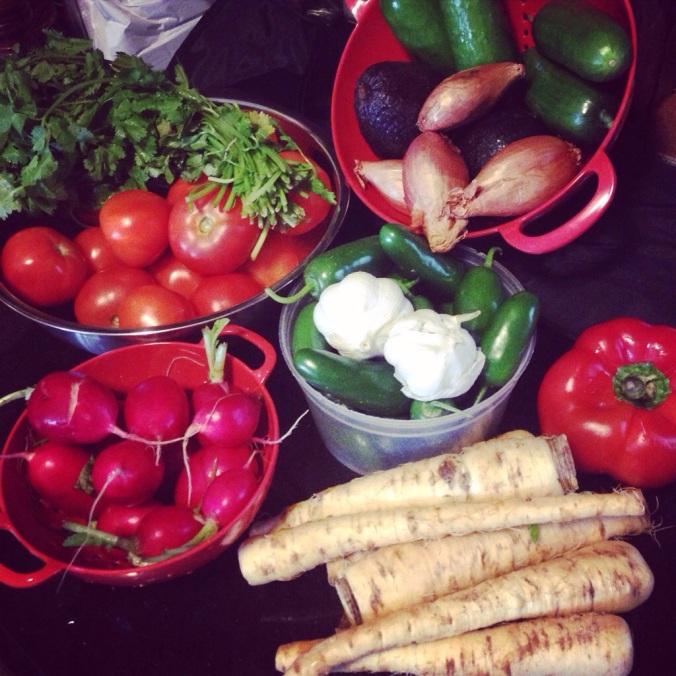 Visiting a local farmers market is one of my favorite parts of the weekend. My shopping list is memorized: tomatoes, avocados, cucumbers and peppers are a must… garlic, onions, fennel and radishes often make it in the bag. There are, however, two items I always look at but have not picked up: Shallots and Parsnips.

Shallots are a small bulbs resembling an onion, but are not as strong and have a garlic undertone. Looking for shallots that are shiny and firm indicates they are fresh. Parsnips are root vegetables related to carrots and parsley. The caloric and carb count for parsnips is almost identical to potatoes – many chefs today will serve a parsnip puree instead of a mashed potato.  Both vegetables can be eaten raw or cooked.

Laying out my vegetables on my counter, I was hungry and feeling slightly impatient. With a pan warming on the stove-top, I began to look for a recipe, but decided instead just to saute these two new flavors together and see what might happen. With a touch of olive oil and a half tablespoon of butter in my heated pan, I started to let the peeled and sliced parsnips cook over medium heat. Turning my attention to the scallion, I peeled and diced it, and added it to the parsnips. Turning the heat to medium-low I let them slowly cook until the parsnips were fork tender.

I cut up one of the heirloom tomatoes and placed it in a bowl, and then poured the warm parsnip/scallion mixture on top. Some fresh cracked pepper – and that is all. So simple, and so amazing. Turns out I loved this so much I prepared the rest of my parsnips the same way in the next few days…. I guess I will need to make another trip to the farmers market this weekend so I can explore roasting them and making a puree!