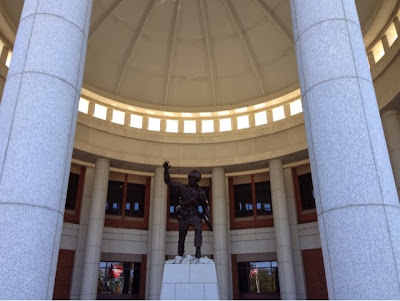 As I made my way to Columbus, Ga for The Soldier Half Marathon, I knew very little about the history of this race, I was just excited for another weekend on the road. 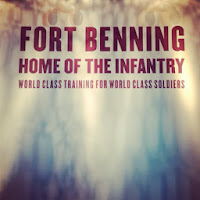 Pulling up to the National Infantry Museum at Fort Benning, I was struck by the size of this majestic structure. I am a history buff, and love learning, so the chance to spend some time here was exciting. 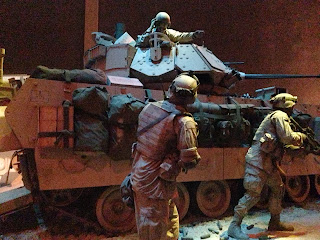 This is one of the reasons I run and look for destination races – I have seen so many places that I would have never visited otherwise. 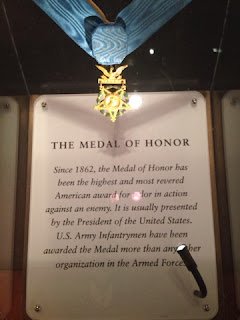 The museum, which is free to enter (there is a suggested donation of $5) contains  beautiful exhibits covering 200 years of military history. In addition there is an IMAX theater and an combat simulator (there are fees for these attractions). I would encourage anyone in the Columbus area to check this out!

My last stop in the museum was the actual packet pickup – organized and efficient, and I left with a ton of goodies including a commemorative coin (actually a poker chip) a NICE bag, a beautiful custom poster, and a very soft t-shirt. 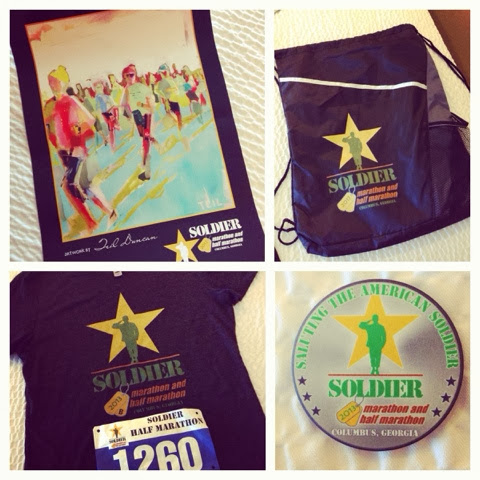 The next stop was my hotel. Organizing my gear on the second bed, I pinned my bib to my race shirt, and then prepared to attach the “Fallen Hero” tribute bib to the back.
The Soldier Marathon provides this bib for runners to run in someones honor. If any runner does not have a relative or friend they wish to dedicate their race to, there is a list of names with pictures and personal information that runners may select from.
Before the race I had talked to a former student about running in honor of her cousin, CPL Gary Allen Koehler, who gave his life during Operation Iraqi Freedom. He was 21… a US Marine… and a Hero. Tears filled my eyes as I carefully placed the bib on my jersey. 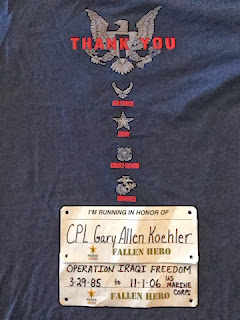 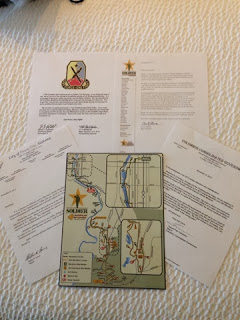 Settling in to relax, I took a closer look at the materials that came in my swag bag. Tucked in with the race flyers and samples were FOUR letters. The first from the race director was appreciated, but not unusual. The second and third were from the mayors of Columbus, Georgia and Phenix City, Alabama (where the race would cross over for part of its route).
The fourth letter was the one that stopped me in my tracks. It was from Major General McMaster and Command Sergeant Major Carabello of the US Army. It started with “In our thirteenth year of war…”.
Thirteen years, how many had lost their lives during that time so that I may live mine in peace and freedom. 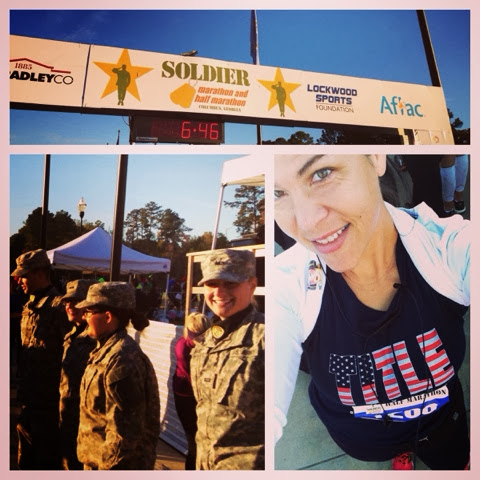 Race morning was a brisk 37 degrees! The crisp air bit at my skin but the blue sky promised a beautiful day for running. The Soldiers at Fort Benning were all smiles welcoming us at the start line.
The hill at mile two was NO JOKE – I wanted to walk, but was spurred on by the Drill Sergeants shouting at us… “Walking is authorized but not suggested!” I did my best to run.
I distracted myself reading the names of the Fallen Heros on the backs of my fellow runners, and many commented on mine.
That is when it really sunk in how important this is – the writing of these names. We can #neverforget on our social media… but these men and women, young and old – deserve us to see their names, and honor their sacrifice.

The payoff for this climb comes at mile six… a long and speed fueling drop.
At every turn, soldiers cheered us on. At every water station men and women in uniform offered up hydration and bountiful words of encouragement. I had not felt this motivated and inspired during a run since last October, at the Marine Corps Marathon in Washington DC.
It occurred to me that this race might be a great alternative to those unable to run the MCM, or unable to get in. There has been a great deal of speculation that this popular race would be moved to a lottery system, due to its popularity and issues with registration. In October, Runners World reported that in 2014 this will be in effect.
While The Soldier Marathon has the same inspirational feeling that MCM is known for, there are a few more reasons runners may want to consider running this race:
Don’t get me wrong, I loved MCM and would do it again – but for those wanting or needing an alternative – this is one that should definitely be considered! 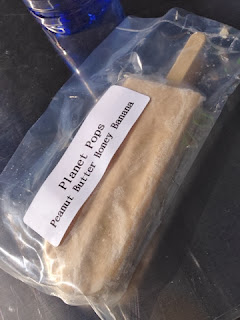 Post race amenities at the race were well organized. After receiving my medal and water, I got a Peanut Butter Honey Banana Popsicle from Planet Pops, which I devoured while I waited while in line for my massage at the recovery tents.  This thing was AMAZING. Full disclosure, after my massage I went back and tried one of their other flavor, Raspberry Lemonade.
I did a little research and found that these are hand made, artisan ice pops. Their only store is in Downtown Columbus, and the next time I am driving through I will stop in to try another flavor… looking at the flavor list, the Coffee and Cream pop is a must to try!!!
A long food line offered hot sausage and cheese burritos, hamburgers, chips, candy, bagels with peanut butter and jelly, soda, Gatorade .. the line seemed to go on forever, but ended with a giant cooler filled with ice cold Michelob Ultra!
Sitting down to stretch, I saw a familiar face. I chatted with this woman (who I have now identified on the Half Fanatics Facebook Page as Suzane Daphne) about races we have been at together.
Turns out she is another runner from Florida, who I had just run with the two weekends prior. We quickly learned we would see each other again the following weekend in St. Augustine. You cannot live in this runners world for two long without this happening, and it is so fun when it does! 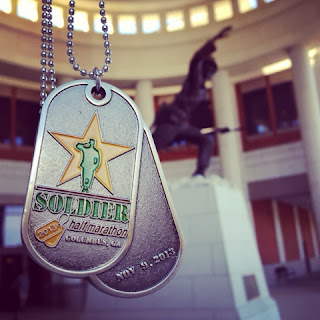 I loved everything about this run. Walking to my car I stopped and listened to the soldiers who were cheering the full marathon finishers around the final curve. There is something so humbling about listening to these brave men and women in honor shouting out praise, admiration and encouragement. It was my honor to run this race, next year – I will take on the full.

7 thoughts on “The Soldier Marathon”