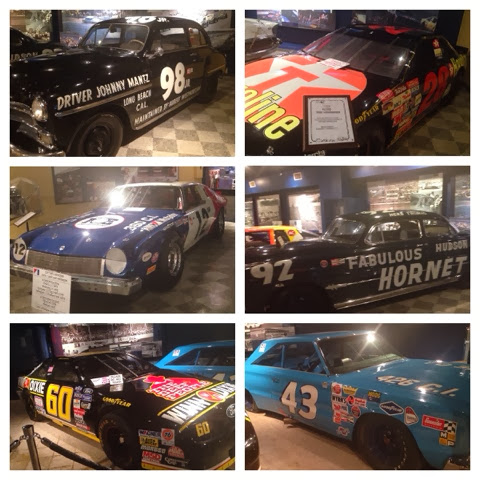 The first victory of the day was getting out of Orlando by 5:30am and through Jacksonville before 8. Arriving in Darlington, SC just after lunch, I passed by my hotel in nearby Florence and went directly to the packet pickup site for the Darlington Marathon (warning, the site plays music!).
Packet pick-up was a no frills event, however to get to it, race participants walked through the stock car museum at the Darlington Raceway. Taking time to walk through and look at the cars and artifacts on display, I realized I had not been certain  what I would find here. The museum website says that they can: “Offer those who are interested in the history of stock car racing and in-depth look at the roots of the sport, and has a lot to pique the interest of newer fans as well.”
The pictures above are just a few of the cars on display. Although this was included as part of the packet pick-up experience, NASCAR fan or not, anyone visiting the area could learn a lot about this iconic American sport for the $5 price of admission (free for children). . 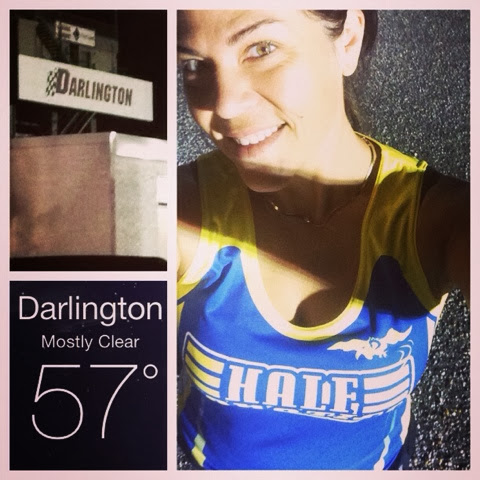 Stepping out of the hotel room in the dark cloak of early morning, the crisp fall air was a refreshing change from the heat and humidity of recent races. Sporting my new “Half Fanatics” singlet, the easy journey from Florence to Darlington found me at the track with plenty of time to spare. 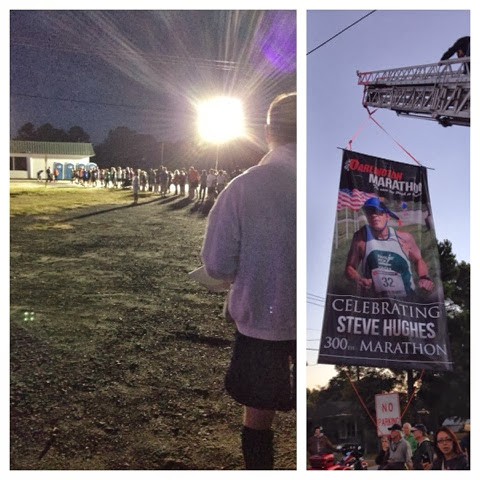 Like most inaugural races – there were some hiccups here. The picture above shows the line for the porta-potties 35 minutes before race start. I got through just before the official start time of 7AM – however the race director did delay the race 10 minutes to let the line clear.  As we waited, he discussed with the mostly patient crowd that next year there would be more.
The wait gave the gathering crowd time to look at the giant banner which, acting as a start line, celebrated Steve Hughes who was running his 300th Marathon at this event. 300 – the number rolled around in my mind. Would I ever be in those ranks? I smiled as I thought… probably, well, for half marathons at least – after all by the end of this running season I will be closing in on the 100 half marathons mark. 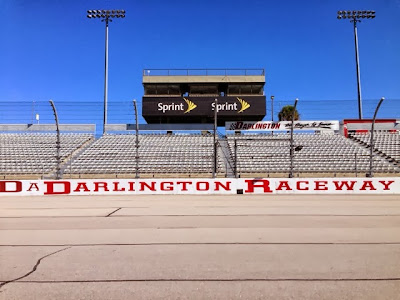 The course was not overly exciting, wrapping through the streets surrounding Darlington. However, like most things in life, it was the finish that mattered. Entering the same tunnel where the cars enter the track – a second wind came upon the runners who finished the final mile on the iconic oval track.
The finish line was filled with fan-fair and and in it waited a treat in the cool air of the morning: hot, fresh, chicken noodle soup – a brimming cup of salt, fat, carbs and protein…. everything needed to begin the recovery process.
Runners sat in the bleachers usually packed with racing fans sipping their soup and water and trading stories of races run and those to come. As enjoyable as this was, as I peered over the empty stands to my right, I remembered that there was no time to waste… my afternoon would consist of the drive west to Pine Mountain, Georgia for tomorrows race. 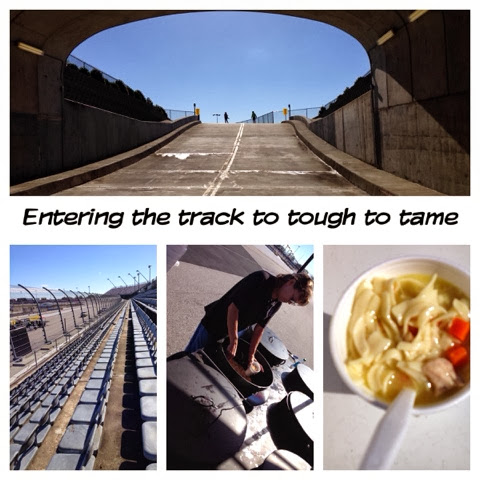 The custom medal, attached to the checkered satin ribbon would be a nice addition to my collection.  The same design but half the size of the full marathon medal, I knew then that if I do this race again next year – I will be coming back for the big one. 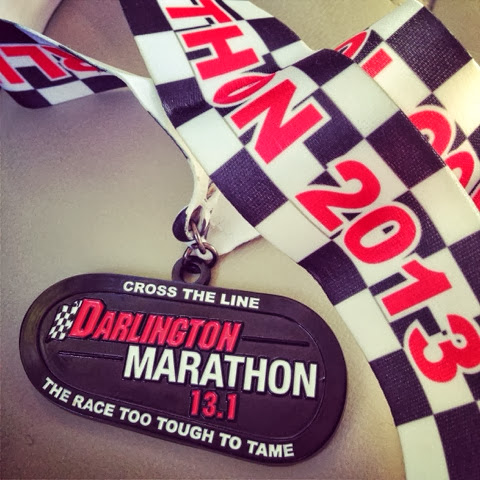 One thought on “The Darlington Half Marathon”