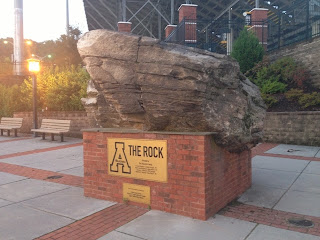 The sun was peaking over the mountain tops as I made the drive from Hickory to Boone, North Carolina last Saturday. The cool morning air was a refreshing reprieve from the hot and humid temperatures I had been running in – so revitalizing that I failed to fully appreciate the effects of the higher altitude.
I arrived at Appalachian State University only 20 minutes before the staggered start of the race.  A folding table manned by several smiling volunteers was situated next to “THE ROCK” pictured above. The “High Country Half Marathon” offered a 7AM start for those who planned to walk all, or part, of this very challenging 13.1 mile course – the majority of which was up hill.
Elevation Profile
4097 ft.
3692 ft.
3288 ft.
2883 ft.
0
1
2
3
4
5
6
7
8
9
10
11
12
13
miles
Total climb: 1467 feet / 447 m
Choosing to take the early start (even though I jogged from the beginning) I met a small group on the track inside Kidd Brewer Stadium. No start line, no fan fair – just a 3, 2, 1 – GO… and we were off. 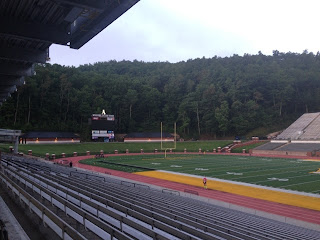 Weaving our way through the streets of Boone was relaxing and surreal. The roads were not yet officially closed but the locals seemed very aware of the race and slowed to wave us through with support and enthusiasm. Just before the two mile mark began an uninterrupted four mile climb up the mountain. Only about 12 of us who had started early, and our friendly little pack shared stories of previous races as together we pushed forward on the twists and turns. Passing farms and fields of horses we discovered that we had been at some of the same races, and shared many of the same goals. It reminded me again why I love the communication and support that exists in the middle of the pack. 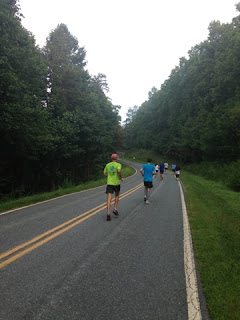 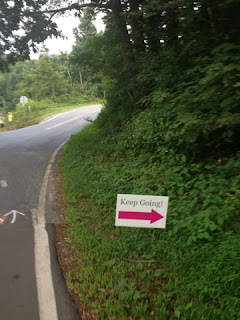 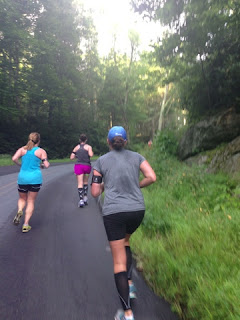 Having become accustom to the barrage of signage at larger races – the High Country Half Marathon offered a refreshing change. There was one sign placed repeatedly through the course that simply said “Keep Going!”. On this day, in this race, this became my mantra – to simply keep moving forward up this climb.
Around the 40 minute mark, the first runner who had started 30 minutes after us ran passed – #743,   Hoyal, Peyton a twenty four year old from Banner Elk, NC who I discovered later finished this amazing course in 1:11:52. What was more amazing, he took the energy to give us a “thumbs-up” when he flew by.
The love did not stop there… runners in 2nd, 3rd, 4th, and fifth place trickled in, and all of them gave words of encouragement… support… appreciation for our participation in this wonderful support that welcomes all with open arms. This is common in the middle of the back, but often the “serious” runners, the few that know they might actually win, don’t have the time for or motivation for the slow masses of runners that flood their races. Maybe it was the mountain air, or the culture of this community, but the reception this race was given was heartwarming. EVERY volunteer cheered enthusiastically – EVERY passing car moved far to the side and waved or smiled sportively. I found myself not caring about my playlist or the beeping of my Garmin, but truly just running in the moment and taking in the natural beauty around me.
Possibly one of the greatest moments was when runner #624 Kerley, Kasey from Statesville, NC slowed down on a very precious downhill to take a pony-tail holder from her wrist and give it to me.  Mine had broken at the beginning of the race, and with no time to replace it, I was running without. That may not seem like a big deal to some – but to me, it said everything about this community of runners. 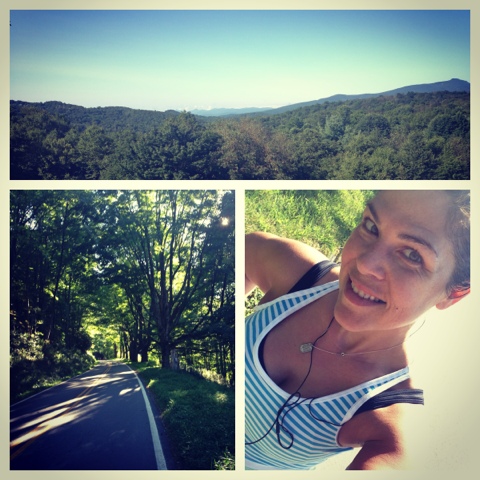 The top of the mountain reminded me why we seek out these races.  Why we are willing to drive 9 hours one way for a little known race with a one page web site. These pictures cannot do it justice – it can only be felt, experienced, understood, and appreciated by making the climb. 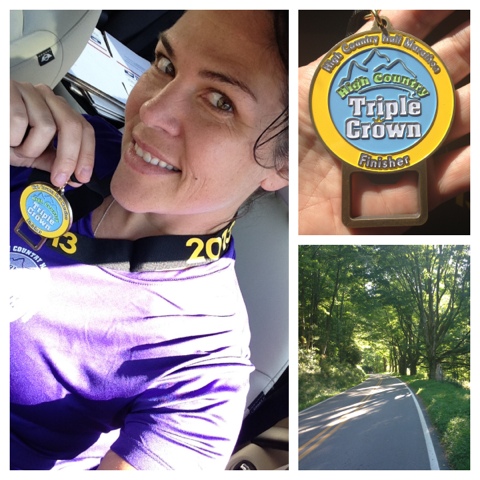 I smiled as the medal was placed around my neck. A FUNCTIONAL medal, with a bottle opener feature, beautifully displaying the HIGH COUNTRY TRIPLE CROWN logo. The year boldly marked on the thick black ribbon – I was impressed. The celebration afterwards featured and impressive spread – fresh fruit and chocolate milk – water bottles, chips and salsa. Ample vans carried us back down to where we had begun. The chatter in the van was one of unified agreement – this was a race worth running – and worth coming back for again.  I am confident that in years to come, my feet will again hit the welcoming road of the high country.

2 thoughts on “The High Country Half Marathon”